We threw a boy/girl Luau for my 8 year old daughter. She was very impressed.

I bought all the Luau party supplies from Oriental Trading Company Inc. 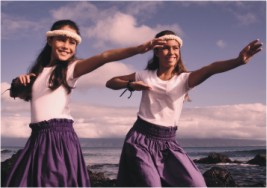 We had grass skirts and hawaiian bandanas for the boys. I also had leis, hairclips, and wrist leis for everyone. All of the party decorations, table grass skirts, stuffed parrots, blow up palm trees and Tiki poles were from the Oriental Trading Company. We also had Luau fun music CD's and we brought our own boombox to play them on.

The party was held at the local park district pavillion.

For the invitations we used empty plastic water bottles. We printed up the invites on cool paper with all the party details. We filled the bottles with some sand and small shells and placed the rolled up invite inside. The post office mailed each bottle for about .49 each with an address label on the outside of the bottle.

As the guests arrived we had the music blaring and the B-Day girl was giving everyone their party clothes to put on.

We began with a game of Limbo (which we also bought at orientaltrading.com) and then had a tug-of-war with a giant barge rope I happened to find on a beach in Iowa. You can buy rope at the local Home Depot though. The tug-of-war was a lot of fun for the kids. We had a pinata Parrot and a hula hoop contest to see who could hula the longest. Some of those girls didn't stop for an hour... I bought all of the hula hoops at Oriental Trading Company also.

We served your typical kid lunch food at the party, but the cake was extra special. I had the local bakery make us a Volcano cake that we could put dry ice in. It worked like a charm! What a cool cake that was. The kids got a kick out of that.

For party favors, all the kids got to take home their outfits and hula hoops and any/all candy they collected from the pinata.

This party lasted 3 hours and there was never a dull moment.