This 12 Days of Christmas Video Scavenger Hunt is a great Christmas activity for holiday parties and gatherings. 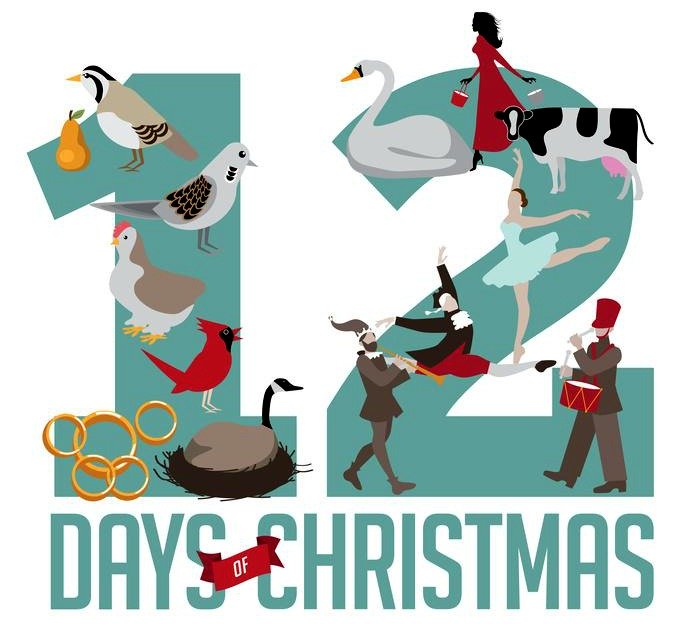 Like many scavenger hunts, it requires teams of people to run (or drive) around to shoot footage of the hunted items. If it's cold in your area around Christmas time, be sure people are prepared for some outdoor activity.

Also, each team needs their own video camera (or phone capable of shooting video footage). It's a bonus if the camera can be hooked up directly to a big-screen TV or projector for playback, so you can see the results as soon as all the groups get back.

It's optimal to conduct the hunt in an area where a lot of people can be found (such as a downtown shopping area).

My friend Jon, the Video Jester, created this scavenger hunt and I previously linked to it. Unfortunately, Jon's Video Jester site is no longer online, so the link no longer works. Many of you have contacted me for access to this hunt, so here it is. Credit to Jon. Have Fun!

Film just the last verse of "The 12 Days of Christmas," starting at 12 drummers drumming and going down to "a partridge in a pear tree."

(It's such a long song, you don't want to have to go through the whole thing a dozen times.)

There are 12 different "parts" to this Christmas video scavenger hunt. Part 1 is "12 drummers drumming," part 2 is "11 pipers piping," etc.  All of the parts are listed below.

You get points based on how well you "perform" each part.

If it's a friendly group, you can have the larger group decide on points for style and other subjective areas. However, if you expect cutthroat competition, you may want to assign one or more impartial judges. If there's a parent or a neighbor around, they could make a good judge.

Here are some specific guidelines for the 12 Days of Christmas video scavenger hunt. Remember that the participants have to sing as they do the actions. You can decide if the gender-specific roles (lords, ladies, maids) need to be all of one gender or not. 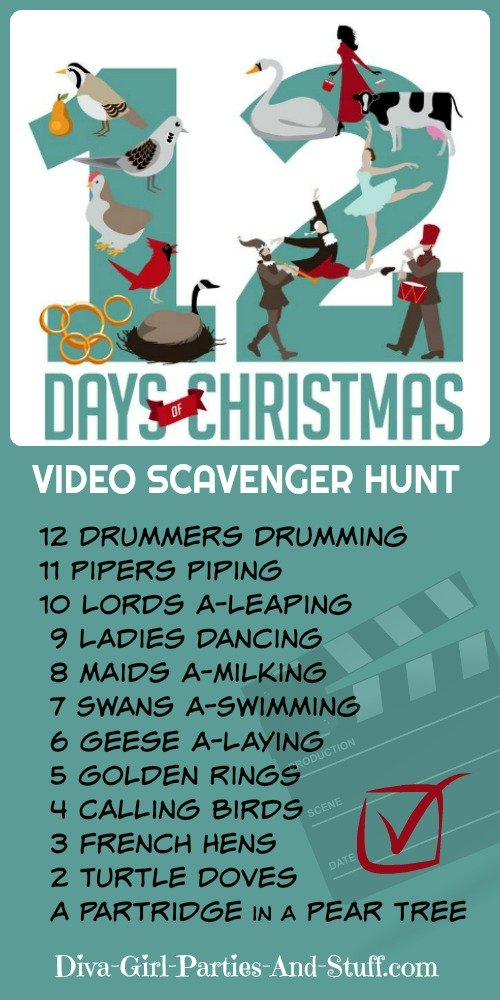 12 Drummers Drumming
Twelve people drumming — on what and with what is part of the creativity challenge.

11 Pipers Piping
Eleven people playing something long and thin like a pipe, either straight in front or to the side like a flute. Something that actually makes sound might earn extra points.

10 Lords a-Leaping
Ten people leaping. Creativity points might be awarded for being all airborne at the same time, twisting in the air, doing splits, leaping over something, "extreme" leaping....

9 Ladies Dancing
Obvious — the style is up to the dancers.

8 Maids a-Milking
This can involve either "milk maid" actions (sitting next to a real or imaginary cow), or something to do with milk.

7 Swans a-Swimming
What do swan-like swimming motions look like?

6 Geese a-Laying
Up to your imagination. Eggs are optional.

5 Golden Rings
Five people, each holding a gold (wedding?) ring (or onion rings?), perhaps together to form a pattern.

4 Calling Birds
They can be calling whatever and however you wish.

3 French Hens
Can a hen-person exhibit "Frenchness"? Real hens would be good, too — French or not.

2 Turtle Doves
Turtle doves are the original "love birds," so a loving couple might be appropriate here.

And a Partridge in a Pear Tree
You get extra style points for a real pear tree, but the "partridge" has to be in some sort of a tree. What "in" means is part of the fun.

Once all 12 parts are filmed, bring them back for judging and enjoyment by all. As mentioned above, it's best if you have a big-screen TV or projector that can be hooked up directly to the cameras.

Have fun with the Christmas video scavenger hunt!