Welcome to Gotham City – the newest and hottest party destination for villains, superheros, and slightly shady characters who have a secret penchant for playing on the dark side.

As kids, most of us loved superheros; and if we are honest, we have to admit that there is probably a small part of us that never really grew up. We still fantasize about having secret powers, riding around in the batmobile, or wielding the Catwoman whip (while also looking like Michelle Pfeiffer or Halle Berry, of course!).

With recent box office hits and the huge success of the television series Gotham, there has been a renewed interest in all things superhero. Childhood comic books are brought to life in a way that appeals to every age group. Mysterious masked, cape-wearing heroes (and heroines) aren't just for kids anymore. In fact, they have become so popular that they have even earned their own section in video stores.

Over the years, a lot of battles have been fought, and won, with strange and unusual superhero powers that have managed to overcome evil and save the day – if only temporarily. And, in no place have more wars been waged than in Gotham. It is a city of mystery and intrigue, where no one is as they seem, everyone has an agenda, and danger lurks around every corner.

Now, it's your chance to live out your fantasy. Pick a side, put on your mask, and join the battle for just one night. 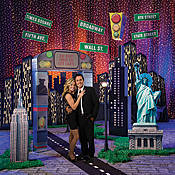 Cityscape Invitations for a Gotham Party

Invitations are the perfect way to create a little mystery and spark the excitement early.

Creating Gotham City is really quite easy. It's all about black, white, and gold! With some very simple decorating ideas you can design an atmosphere that is dark and dangerous, fun and funky, or classy and sophisticated (while still having a touch of intrigue and trickery, of course!).

Unless you are hosting a dinner, simple fare will work perfectly for a Gotham party.

In keeping with the color scheme, make platters of fruit from yellow pineapple and black grapes, or trays of cheese and black olives.

For a fun twist, serve drinks with Gotham-theme names such as “The Dark Knight”, “Robinade”, “The Riddler”, or “Catini”. Complete cocktails with bat-topped swizzle sticks or black cat lollipops.

It is always thoughtful to give each guest a nice favor or small gift to commemorate the evening and thank them for being part of the fun. Some ideas could include: