Challenge your party guests to a Who's Who JLo vs Shakira trivia game. As much as these two highly successful divas have in common, they do have some subtle and not so subtle differences.

For each fun fact below, can you determine which lady the statement is true for? 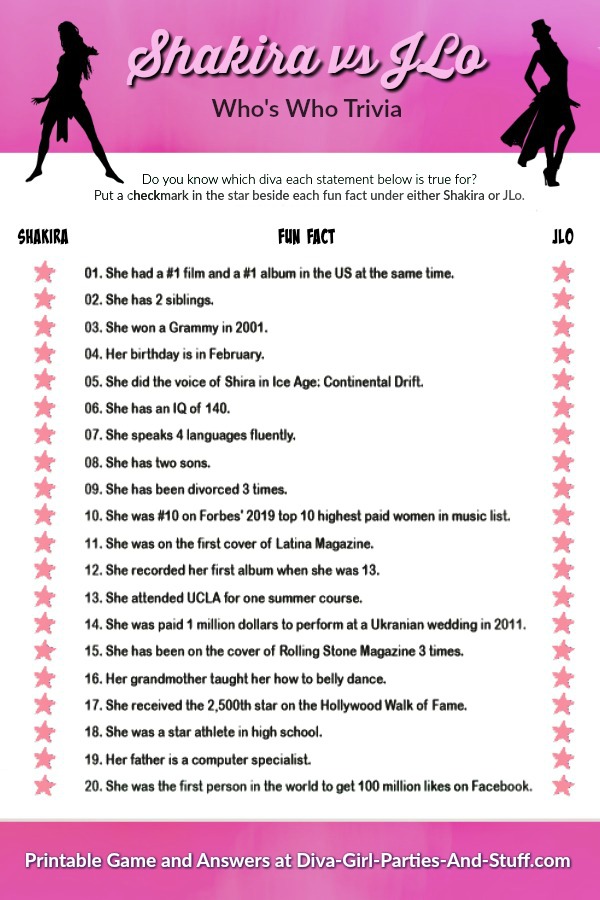 Answers and a Printable Version of the Game Available Below

04. Her birthday is in February.

05. She did the voice of Shira in Ice Age: Continental Drift.

11. She was on the first cover of Latina Magazine.

13. She attended UCLA for one summer course.

15. She has been on the cover of Rolling Stone Magazine 3 times.

16. Her grandmother taught her how to belly dance.

18. She was a star athlete in high school.

19. Her father is a computer specialist.

20. She was the first person in the world to get 100 million likes on Facebook.

In 2001, Jennifer Lopez made history by becoming the first artist to have an album (J.Lo) and a feature film (The Wedding Planner) hit #1 in the same week.

It has been widely reported that Shakira has an IQ of 140. Her dream career was to be a psychologist and if her singing had not been successful, she would have pursued psychology or astronomy.

There are varying opinions on how many languages Shakira speaks fluently, but the popular consensus is 4. She speaks Spanish (her native language), as well as Portuguese (learned while touring Brazil in her teens), English (with the help of a former American boyfriend), and Italian. There are videos of her speaking French, Catalan, and Arabic, but it is unclear if she speaks those languages fluently. A few years ago Shakira reported on Twitter that she and her boyfriend regularly speak at least 7 languages around their son (Spanish, Catalan, English, French, German, Russian and Chinese) in hopes that he will become multi-lingual too.

As of January 2020 both ladies have two children, but it is Shakira who has 2 sons, Milan and Sasha. Jennifer Lopez has twins, a girl named Emme and a boy named Max. When JLo ties the knot with A-Rod, she will also become stepmom to his two daughters, Natasha and Ella.

As of January 2020, JLo has been divorced 3 times. Marriages to Marc Anthony (2004–2014), Cris Judd (2001–2003), Ojani Noa (1997–1998) ended. Here's wishing her a lifetime of happiness with A-Rod. Shakira has never been married and has noted publicly that she has no plans to do so. She is content with the partnership and two children she shares with Spanish football player, Gerard Piqué, as is.

Shakira was #10 on the Forbes' 2019 top 10 highest paid women in music list with earnings of $35 million. Jennifer Lopez beat her by taking the #7 spot with $43 million in earnings.

Jennifer Lopez appeared on the premiere issue of Latina Magazine in Summer 1996. Both Shakira and JLo have appeared on multiple covers of the magazine since then.

In 2007 Shakira took a short break from singing and attended UCLA for one summer course, called "Introduction to Western Civilization: Ancient Civilizations from Prehistory to Circa A.D. 843." By dressing in boyish attire and keeping low key, she managed to keep her stardom pretty well hidden and blended right in with the other students. Lopez attended Baruch College for one semester, but soon abandoned higher education to pursue her dreams of performing on stage and screen.

Yep! If you have a million or more to spare you can invite JLo to sing at your special occasion. Lopez was reportedly paid $1 million to sing at the wedding of the son of Uzbek oil tycoon, Azam Aslamov, in the Republic of Crimea in 2011, but she has also performed for other birthdays and weddings for prices ranging from $1-5 million.

If you've seen Shakira perform, you know that girl can really shake her belly and she has her grandmother to thank for teaching her how. Shakira's famous belly dance moves were inspired by the Arab culture that was passed down from her father's side.

Jennifer Lopez was honored with the 2500th star on the Hollywood Walk of Fame on June 20, 2013. 19 months prior to that, Shakira received the 2,454th star on November 8, 2011 and became the first Colombian artist to receive such a star.

JLo was on the track team in high school and competed on a national level. To this day, those who know her comment on what an incredible athlete she is. She even completed the Nautica Malibu Triathlon in two hours, 23 minutes, and 28 seconds in 2008 when she was almost 40 years old.

JLo's father, David López, is a computer specialist (technician) at Guardian Insurance in New York City. Shakira's father, William Mebarak, is a journalist with an entrepreneurial spirit who has previously worked as a health visitor, insurance agent, teacher of literature, and jewelry store owner.

In July 2014, Guinness World Records recorded Shakira as the first person EVER  to reach 100 million likes on Facebook. Wow!
Jenny from the block has less than half that number, but the figures are reversed on Instagram where Lopez has almost double the followers (109 million) of Sharika (60 million).

Want a printable copy of this game? Simply fill out the form below.

Things Jennifer Lopez and Shakira Have in Common

1. Both have a Barbie created in their likeness.

2. Both have been nominated for a Golden Globe Award, but neither has won one.

3. Both abstain from drinking and smoking.

5. Neither has a permanent tattoo. Though you may have spotted them sporting tattoos in the past, that body art was temporary only.

7. Both were invited to the White House by President Obama. Shakira was invited in 2010 to discuss early childhood development. Jennifer and her then husband, Mark Anthony, were invited in 2011 to watch the Super Bowl with the Obamas.

OFF THE CHARTS FUN FACT