Thinking of hosting a Murder Mystery for your Sweet 16? Read about my party below and check out My Virtual Party Space to see some of my pre-party planning.

The Scoop on My Sweet 16 Murder Mystery Party...

I had just finished enjoying a toast with some of my friends, or people I am told should be my friends – it’s all about “who” you know – when Kennedy complained that she wasn’t feeling well. I didn’t think much of it and continued talking with Amber, who was standing beside me. Amber was halfway through her story when I heard a piercing shriek. I spun around just in time to see Kennedy collapse to the floor. A sudden deadly hush fell over the room as all the girls stared in confusion, not sure what to think about what had just happened.

“Is she okay?” Amber managed to ask. The question seemed to snap everyone out of their trance and there was a rush of activity as some girls backed away and others gathered around. After the initial panic had worn off, it didn’t take long for someone to discover that Kennedy was not okay at all. In fact, she was dead. What were we going to do? How could this have happened? And at such an important event? Thankfully, my friend Kelsie was present and she just happened to be a homicide detective. Convenient, eh? She promised that she was going to find out how Kennedy died. How did she die? Was it something she had eaten? An allergy? Was she just not feeling well, or had someone wanted her dead? Until these questions were answered we were all suspects. Well, Kelsie didn’t say that, but we knew she was thinking it. And she told us no one could leave until she had collected all her evidence and questioned each of us.

This could be a problem. I was sure that I wasn’t the only one with something to hide. Everyone had secrets, right? Each of us, a little desperate to remove suspicion from ourselves, began our own detective work - subtly, of course. 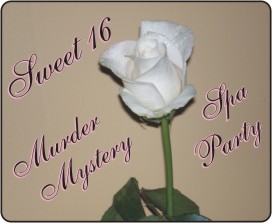 Kelsie said that since we had paid for the room at the spa paradise, and no one could leave anyway, we might as well enjoy the luxuries. The dining room was lavishly decorated, and the tables were set with crystal glasses, fancy appetizers, and of course, luscious desserts. Several of the girls stood gossiping conspicuously around the table, nibbling on snacks, while others tried to pry secret information out of the manicurist, party planner, or spa owner. While smiles were always plastered in place (probably from the face masks), we all knew no one was above blackmail, pay-offs, and possibly threats. There were even a few hidden weapons buried in the bottom of purses or tucked in robe pockets. Although no one would admit it, everyone in that room knew that the body being carried out could have just as likely been them, and even now, no one was safe. It was survival of the fittest as everyone fought to keep themselves alive and their reputation in tact. Rumors, suspicions, questions, lies – if one of us could just piece the clues together and figure out what happened to Kennedy, we would be a hero.

After a while, Kelsie called us all together. Apparently the crime had been solved and the evidence pointed to someone in our group. There was a murderer –or should I say murderess? – among us. Who was it?

Okay, so the toast wasn’t real, there is no Kennedy or Amber, I’m not friends with a homicide detective (though I wish I were), and I definitely didn’t witness a murder (and I hope I never do). The party, though, is real, and these events did happen – just not in the way I tried to imply. This was my sixteenth birthday celebration and we were all characters in a murder mystery. The goal, of course, was to solve the crime, and yes, blackmail, bribes, threats, and even another murder were all fair tactics. The better you were at playing your role, asking questions, and listening to the whispered conversations around you, the more likely you were to be the one to discover the murderer. It is like being in a play where the script is written as the evening unfolds. While the purpose of the evening was to solve a crime, there was still food, spa treatments, and party games – with murder woven in. And afterwards, the girls talked about it for days, discussing their characters as if they were long time friends.

So are you tired of the same, old, typical party plans? Looking for something different? Want a night filled with food, fun, and intrigue? Try a murder mystery. It is great for people of all ages, and you can choose one that suits your situation. It can be casual, intense, small, or intimate; but, as the saying goes, be careful because “people are not always what they seem.”