A Quiz on the World's Most Famous Fashion Doll 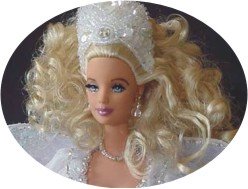 Barbie is such a popular part of our culture that you would think Barbie trivia would be relatively easy, but think again.

There's probably a lot you don't know about this beauty icon.

For instance, do you know how much a 1959 Barbie is worth? Or what about her name...

Do you know Barbie's real name?

Use this Barbie trivia at your next girl party and see just how much you and your friends know about Barbie.

04. Who was Barbie named after?
A. Barbara Stanwyk
B. Barbara Handler
C. Barbara Babcock

06. In the early 1960's, Barbie took on the style and sophistication of the decade's most famous trendsetter - Jackie Kennedy. What was her haircut called?
A. Bubble cut
B. Bob cut
C. Page boy cut

07. In 1967, how did Mattel market the new & updated Mod Barbie with a "Twist 'n Turn" waist?
A. Name Mod Barbie contest for a chance to win Barbie prizes
B. Trade in your old Barbie for an all new Barbie
C. New Mod Barbie for $1.50 cereal box coupon

08. Who was the first black doll in the Barbie family of dolls?
A. Francie
B. Stacy
C. Christie

09. Who was the first celebrity to become a doll in the Barbie family?
A. Marilyn Monroe
B. . Twiggy
C. Cher

10. Who came first, Midge or Skipper?
A. Midge
B. Skipper
C. Both were introduced at the same time

11. In 1977, Barbie was given a new face, with long blonde hair and a big smile. What is this face design, that was used for over 20 years, called?
A. Angel
B. Superstar
C. Beauty Queen

12. Why was the Teacher Barbie doll recalled by Mattel in 1995?
A. Her outfit was too sexy for a teacher
B. The lenses on her glasses were dangerous if broken
C. She wasn't wearing panties

14. What was the name of Barbie's 1986 rock band?
A. The Rockers
B. Barbie's All Star Rockers
C. Blue Rhapsody

15. The popular "Dolls of the World" series was produced from 1980 to 2000 - what was the first one issued?
A. French Barbie
B. Italian Barbie
C. Swiss Barbie

17. The 1998 Limited Edition Sunflower Barbie was inspired by the work of what artist?
A. Vincent van Gogh
B. Claude Monet
C. Henri Matisse

18. What artist was commissioned in 1986 to paint a portrait of Barbie?
A. Francis Bacon
B. Thomas Kinkade
C. Andy Warhol

19. Why was the 1999 "Generation Girl" series controversial?
A. One doll had a nose ring and another had an ankle tattoo
B. The series include an unmarried pregnant Barbie
C. Both

20. What country condemned Barbie (which was already banned in this country) with this statement: "Jewish Barbie dolls, with their revealing clothes and shameful postures, accessories and tools are a symbol of decadence to the perverted West. Let us beware of her dangers and be careful."?
A. Pakistan
B. Saudi Arabia
C. Kuwait

1. In the 1950s every proper lady would have one of these in her purse - what is it? Answer

2. What was the difference between the #1 Barbie and #2? Answer

3. Why is a tiny brass compact considered a "holy grail" to vintage Barbie collectors? Answer

To view this printable Barbie trivia, you will need Adobe Reader installed on your computer (the latest version is recommended). You can get your free Adobe Reader here (a new window will open so you can download without leaving this page).