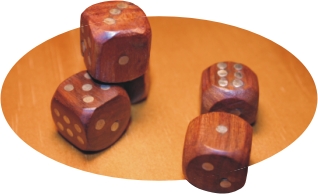 Deception is the key to winning Liars Dice (Liar's Dice). How good are you at deceiving and/or spotting a skilled deceptor? Plan a game night or a pirate party and challenge your guests to a game or two of Liar's Dice.

Liars Dice (Liar's Dice) requires the ability to deceive and to detect an opponent's deception. It basically involves guessing how many dice, placed under cups, there are on the table showing a certain number. To win, be the last player with one or more dice remaining in your possession. When a player loses all of their dice, they are out of the game.

Each player starts the game of Liars Dice having five dice and a cup, which is used for mixing the dice and concealing each player's dice from the other players. Each game consists of several rounds.

Players each roll one die to determine who will bid first. The player with the highest roll starts the bidding. If there is a tie, the players who tied roll again. In all rounds following, the winner of the last round's challenge opens the bidding.

When the order of play has been determined, all of the player's roll their dice at the same time, shaking the dice in their cups and then, upturning their cups on their dice to conceal them from their opponents. Players may look at their own dice at any time, but must not touch them once they have rolled them.

One player (determined above) begins bidding. Players bid on the numbers showing on their own dice as well as all the other dice in play. The number 1 is a wild card and may be counted as any number from 2-6. Players may use deceit when bidding (eg. they may bid two 5s even though they don't have any 5s), but it is wise not to overdo the bluff or they may be challenged quickly.

The bidder picks a face number 2 through 6 (1 is a wild card) and a quantity. The quantity states the player's opinion on the minimum number of the chosen face that has been rolled in total on the table. A "1" is wild and counts as the stated face. (In a five dice each, three player game, the lowest bid is "one 2" and the highest bid "fifteen 6s".)

If the current player thinks the previous player's bid is wrong, he challenges it and then all dice are revealed to determine whether the bid was valid. Revealing the same number or more of the relevant face than was bid is a successful bid, in which case the previous player wins. Otherwise the challenger wins.


Examples of revealed dice results for a bid of "seven 4s in Liars Dice:


(Liars dice can also be played with poker dice, in which case the Ace is wild)

While playing Liars Dice, you may choose to place one or more of your dice outside of your cup and then reroll your remaining dice, being sure to conceal the dice you reroll. You may ONLY do this IMMEDIATELY after you open or raise a bid. If any of dice you reroll match your bid, they will count toward the total. This could improve your chances for winning the round if you are challenged. You are permitted to show as many dice as you wish outside of your cup, provided you still have at least one die left to reroll. Any dice you choose to show don't have to match your bid, but must remain outside of your cup till the round is over. If they match the final challenged bid, they will be included in the total.


When a challenge occurs:

Dice that are lost during a challenge do not return to the game. When a player loses all of their dice, they are out of the game. Rounds continue till ONLY one player has one or more dice left and is declared the WINNER of Liars Dice.

General playing instructions and rules for Liars Dice found at Wikipedia. There are also several variations of Liars Dice noted there.