The Story of St Patrick

There are many versions of the story of St Patrick. His life is one that historians and story tellers have often researched and documented.

Though there are similar threads of truth that run through them, there will also always be smatterings of Irish folklore and legend woven throughout them.

We have done our best to create a simple left right game based on popular beliefs about the life of St. Patrick.

We trust that you will enjoy the truth and the legend of the story of St Patrick as you play the game in memory of one of the most famous saints in history. 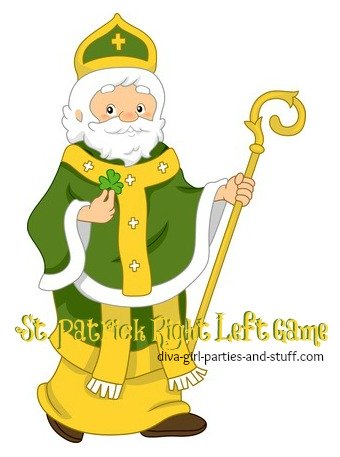 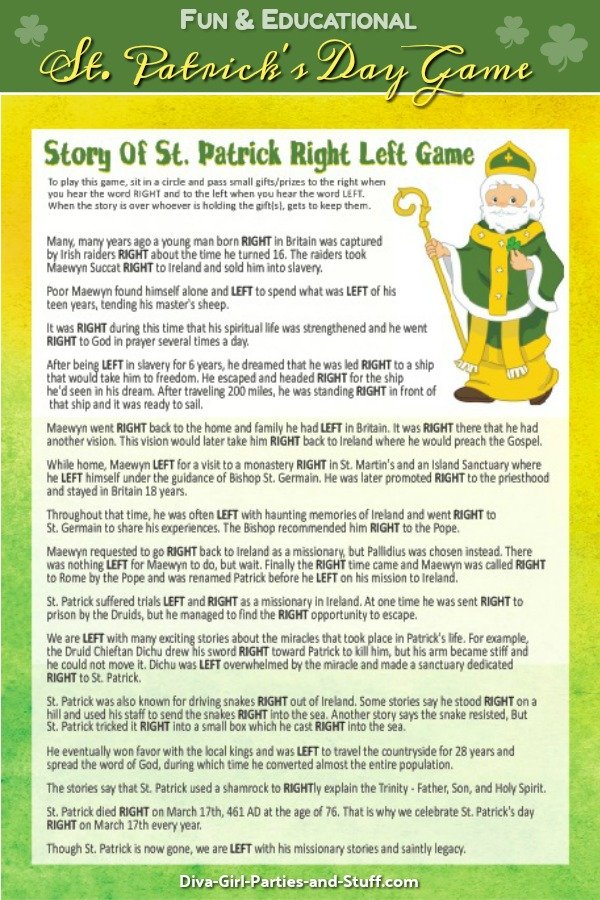 You'll need to assign someone to read the story. The more gifted they are at storytelling, the better as it will add to the fun. Accentuate any instances of RIGHT and LEFT as you come to them.

Have guests pass small gifts to the LEFT and RIGHT accordingly and when the story is over, everyone keeps what they have in their hands.

Since it's St. Patrick's Day we're celebrating it would be fun to put a 3 leaf clover in one gift and a gold coin in another and have special prizes ready for whoever opens those gifts at the end.

You can just send one or two gifts around if you like, but especially when there are children involved I like to have something for everyone. The mystery is what is inside.


The Story of St Patrick 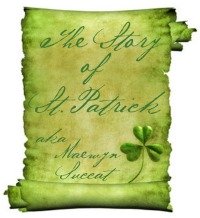 Many, many years ago a young man born RIGHT in Britain was captured by Irish raiders RIGHT about the time he turned 16. The raiders took Maewyn Succat RIGHT to Ireland and sold him into slavery.

Poor Maewyn found himself alone and LEFT to spend what was LEFT of his teen years, tending his master's sheep.

It was RIGHT during this time that his spiritual life was strengthened and he went RIGHT to God in prayer several times a day.

After being LEFT in slavery for 6 years, he dreamed that he was led RIGHT to a ship that would take him to freedom. He escaped and headed RIGHT for the ship he'd seen in his dream. After traveling 200 miles, he was standing RIGHT in front of that ship and it was ready to sail.

Maewyn went RIGHT back to the home and family he had LEFT in Britain. It was RIGHT there that he had another vision. This vision would later take him RIGHT back to Ireland where he would preach the Gospel.

While home, Maewyn LEFT for a visit to a monastery RIGHT in St. Martin's and an Island Sanctuary where he LEFT himself under the guidance of Bishop St. Germain. He was later promoted RIGHT to the priesthood and stayed in Britain 18 years.

Throughout that time, he was often LEFT with haunting memories of Ireland and went RIGHT to St. Germain to share his experiences. The Bishop recommended him RIGHT to the Pope.

Maewyn requested to go RIGHT back to Ireland as a missionary, but Pallidius was chosen instead. There was nothing LEFT for Maewyn to do, but wait. Finally the RIGHTtime came and Maewyn was called RIGHT to Rome by the Pope and was renamed Patrick before he LEFT on his mission to Ireland.

St. Patrick suffered trials LEFT and RIGHT as a missionary in Ireland. At one time he was sent RIGHT to prison by the Druids, but he managed to find the RIGHT opportunity to escape.

We are LEFT with many exciting stories about the miracles that took place in Patrick's life. For example, the Druid Chieftan Dichu drew his sword RIGHT toward Patrick to kill him, but his arm became stiff and he could not move it. Dichu was LEFT overwhelmed by the miracle and made a sanctuary dedicated RIGHT to St. Patrick.

He eventually won favor with the local kings and was LEFT to travel the countryside for 28 years and spread the word of God during which time he converted almost the entire population.

The stories say that St. Patrick used a shamrock to RIGHTly explain the Trinity - Father, Son, and Holy Spirit.

Though St. Patrick is now gone, we are LEFT with his missionary stories and saintly legacy.