Even with a fun little refresher course on the American Presidents a la the above Animaniacs' music video, we're sure you'll find the questions below challenging.

Use this presidential trivia in the classroom or add it to an inauguration party or Fourth of July event. Omit the multiple choice answers and it's perfect for a game of Jeopardy or a pub night trivia competition too.

Did you know that three U.S. presidents died on the 4th of July?
John Adams and Thomas Jefferson both died on the 50th anniversary of the signing of the Declaration of Independence, July 4, 1826. Five years later to the day James Monroe died. 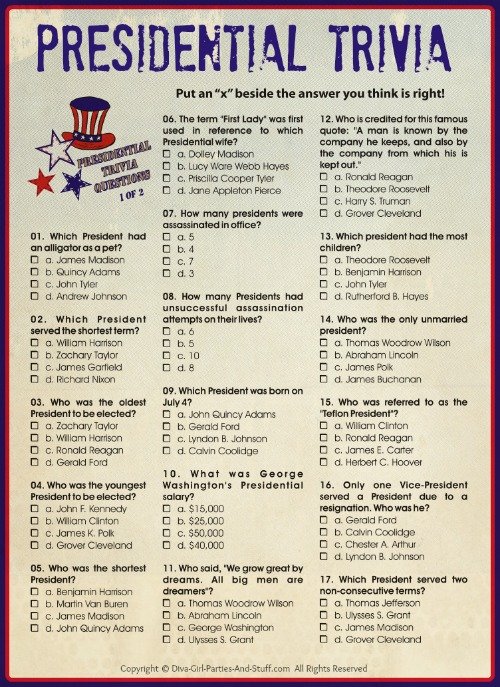 Enjoy using this presidential trivia to discover how well you and your guests know the historical facts of the men who've held the highest office in the United States of America.

And, if you're a pet lover try our NEW All the Presidents' Dogs game.

01. Which President had an alligator as a pet?
a. James Madison
b. Quincy Adams
c. John Tyler
d. Andrew Johnson

03. Who was the oldest President to be elected?
a. Zachary Taylor
b. William Harrison
c. Ronald Reagan
d. Gerald Ford

04. Who was the youngest President to be elected?
a. John F. Kennedy
b. William Clinton
c. James K. Polk
d. Grover Cleveland

09. Which President was born on July 4?
a. John Quincy Adams
b. Gerald Ford
c. Lyndon B. Johnson
d. Calvin Coolidge

12. Who is credited for this famous quote: "A man is known by the company he keeps, and also by the company from which his is kept out."
a. Ronald Reagan
b. Theodore Roosevelt
c. Harry S. Truman
d. Grover Cleveland

13. Which president had the most children?
a. Theodore Roosevelt
b. Benjamin Harrison
c. John Tyler
d. Rutherford B. Hayes

14. Who was the only unmarried president?
a. Thomas Woodrow Wilson
b. Abraham Lincoln
c. James Polk
d. James Buchanan

15. Who was referred to as the "Teflon President"?
a. William Clinton
b. Ronald Reagan
c. James E. Carter
d. Herbert C. Hoover

16. Only one Vice-President served a President due to a resignation. Who was he?
a. Gerald Ford
b. Calvin Coolidge
c. Chester A. Arthur
d. Lyndon B. Johnson

18. George Bush said that this President was "known to receive guests in his bathrobe and slippers."
a. Thomas Jefferson
b. John Adams
c. James Madison
d. Martin Van Buren

20. Who was the first President to wear trousers instead of knee breeches?
a. Thomas Jefferson
b. James Monroe
c. James Madison
d. John Q. Adams

21. Who was the first President to be born a U.S. citizen?
a. Andrew Jackson
b. William Harrison
c. John Adams
d. Martin Van Buren

22. Besides President Clinton, who was the only other President to be impeached?
a. Richard Nixon
b. Lyndon Johnson
c. Andrew Johnson
d. Harry S. Truman

24. Which President is credited with the creation of the phrase "OK" or "Okay"?
a. Martin Van Buren
b. John F. Kennedy
c. Zachary Taylor
d. James Buchanan

25. Which President was famous for his cooking?
a. James Carter
b. James Garfield
c. Dwight D. Eisenhower
d. Calvin Coolidge

28. What is the most common presidential first name?
a. John
b. Andrew
c. James
d. William

30. Whose presidential campaign slogan was "A chicken in every pot, a car in every garage"?
a. Ronald Reagan
b. Herbert C. Hoover
c. William Clinton
d. Woodrow Wilson

If you would like a printable copy of this presidential trivia,
please fill in the form below. 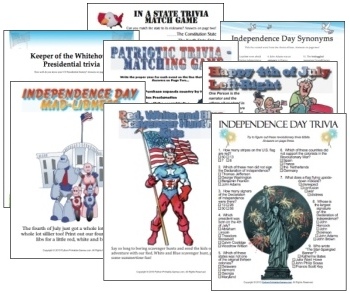 01. b. Quincy Adams (Adams kept his unusual pet in the East Room of the White House.)

03. c. Ronald Reagan (President Reagan was 69, only a few days short of his 70th birthday at inauguration.)

04. a. John F. Kennedy (President Kennedy was 43 years old at his inauguration, making him the youngest elected president; however, Theodore Roosevelt was actually the youngest to become president (42) when he succeeded President McKinley who had been assassinated.)

06. a. Dolley Madison (This term was first used in 1849 by Zachary Taylor at the state funeral of Dolley Madison. The term was later popularized in 1877 when the title was given to Lucy Ware Webb Hayes.)

07. b. 4 (Presidents Lincoln, Garfield, McKinley, Kennedy were all assassinated while in office.)

14. d. James Buchanan (After a broken engagement and the subsequent death of his former fiancee, Buchanan vowed to never marry.)

15. b. Ronald Reagan (It is said that President Reagan earned this nickname due to his ability to avoid blame during scandals.)

16. a. Gerald Ford (Ford was appointed vice-president when Spiro Agnew resigned. He was the first person ever to be appointed to the vice presidency. He later became president when Richard Nixon resigned his office on August 9, 1974.)

18. a. Thomas Jefferson(President Bush made this comment at a ceremony commemorating the 265th birthday of President Jefferson.)

19. b. Abigail Fillmore(First Lady Fillmore had the bathtub installed during her husband's 1850-53 term in office.)

22. c. Andrew Johnson (President Johnson was impeached twice. The first was in 1867, which was simply a list of complaints. In 1868, the accusation was that President Johnson had violated the Tenure of Office Act when he removed Edward Stanton as Secretary of War and replaced him with Lorenzo Thomas. In both cases, the Senate could not come up with the two-thirds majority needed to convict so Johnson was acquitted of all charges.)

23. b. Theodore Roosevelt (President Roosevelt was given the prize in 1906 for arbitrating the end of the Russo-Japanese War.)

24. a. Martin Van Buren (President Van Buren was nicknamed "Old Kinderhook" after his hometown. This was later shortened to O.K. and the phrase "It's OK" was born. This eventually evolved to the official work "okay".)

25. c. Dwight D. Eisenhower (President Eisenhower loved to cook and is known for his recipe for vegetable soup which can be found online if you wish to try it.)

28. c. James (Six Presidents had the first name James including: Presidents Madison, Monroe, Polk, Buchanan, Garfield, and Carter (although inaugurated officially using the name "Jimmy"). The next most common name is "John" with four presidents bearing this name including: Adams, Quincy Adams, Tyler and Kennedy.)

29. b. James Buchanan (President Buchanan received a herd of elephants as a gift from the King of Siam. He also had a pair of bald eagles and a dog.)